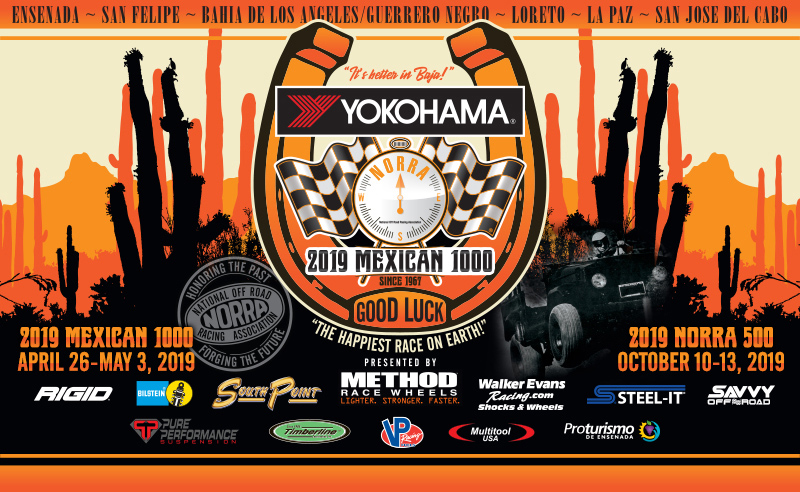 On The Rise: Mahindra Roxor A Fitting Addition To the 2019 NORRA Mexican 1000

-- Ned and Kat Bacon To Compete With No Support Team -- 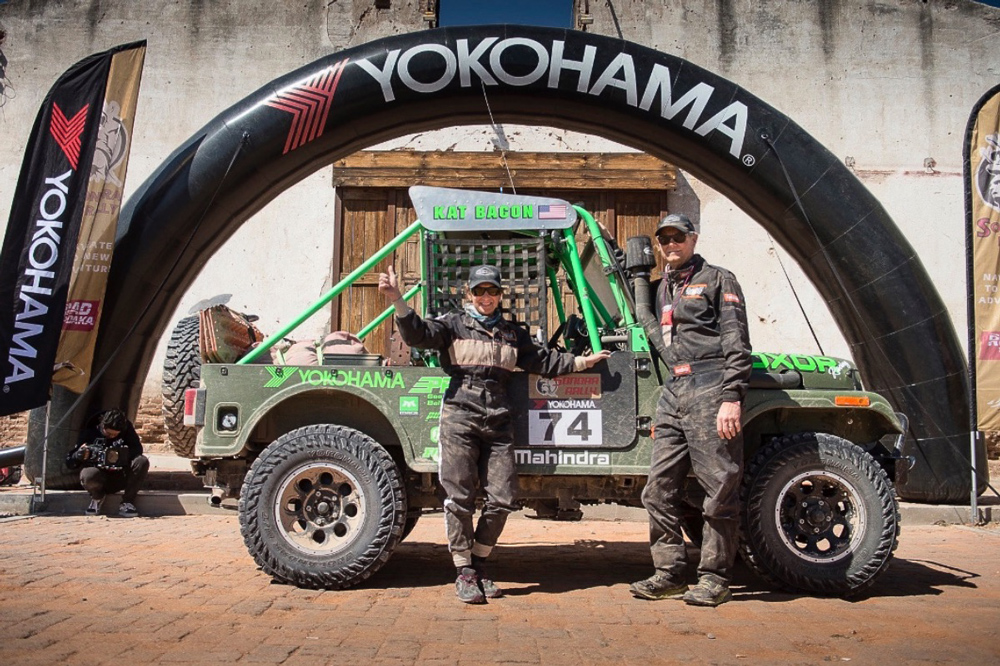 AGUA DULCE, CALIF. – In an annual on and off-road rally that is as much retro experience as adventure, Yokohama NORRA Mexican 1000 veterans Ned and Kat Bacon are returning to next week’s event with yet another uniquely eclectic entry.

In marked contrast to their more grassroots-based efforts of the past, this year the amiable couple has teamed with India-based industrial giant Mahindra North America to use the five-day Baja competition in helping launch their new Roxor to the North American market. Sold as a UTV in the United States, the Roxor is a throwback to good old days when 4x4s were simple, utilitarian machines - much like the 4x4s that ran in the early NORRA races in the ‘60s and early 1970s.

Next week will mark the 10th running of a race famous for its retro style and emphasis on combining real competition with adventure-fueled fun. The Yokohama NORRA Mexican 1000 presented by Method Race Wheel is a vintage-themed rally that commences on Sunday, 28th in Ensenada, Baja Mexico and finishes 1,256 miles later on Thursday, May 2nd on the beaches of San Jose Del Cabo. 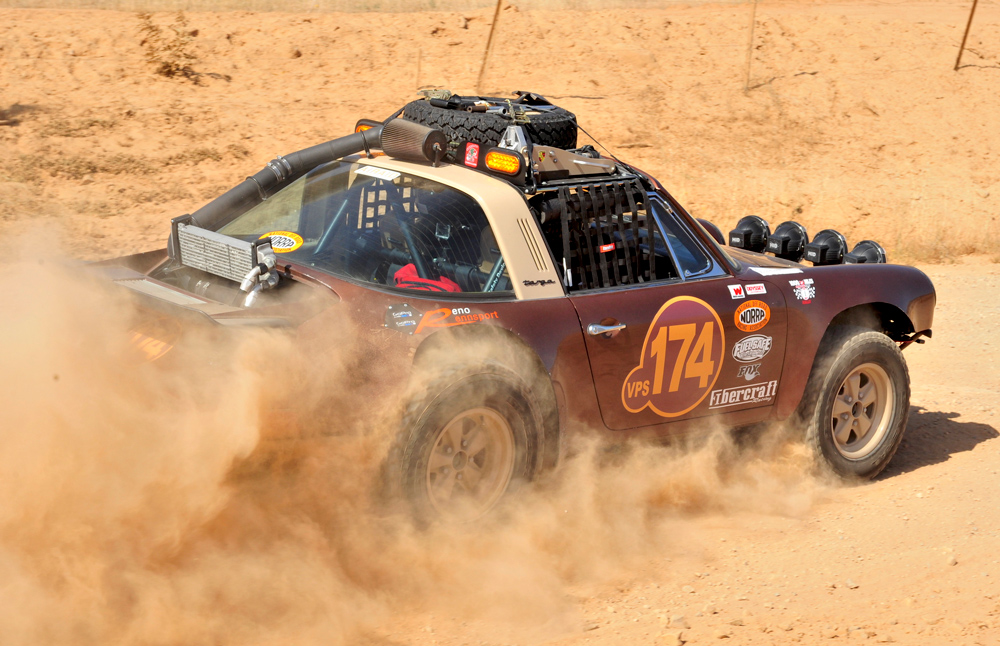 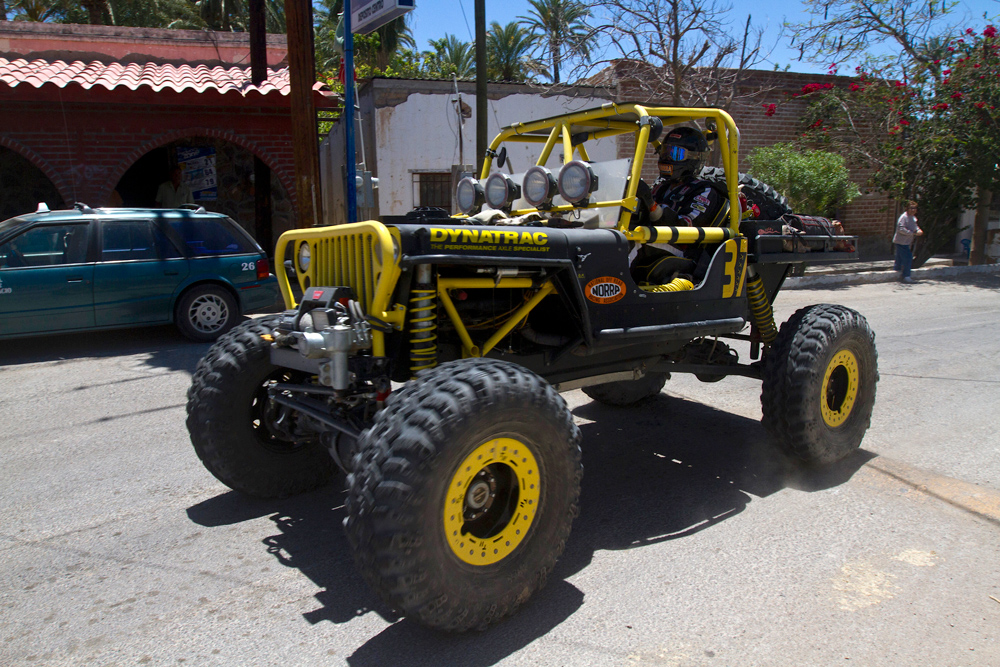 ROLLIN' BACON STYLE: Ned and Kat Bacon have enjoyed the Mexican 1000 experience with other wholly unique retro vehicles in the past, including "CoCo" their Porsche 911-based rally car and a Willy's based 4x4 nicknamed the "Killer Bee."

This will be the adventurous couple's sixth NORRA Mexican 1000 race as they compete under the “Team Roxor Racing” banner running in the Pioneer 4x4 class carrying the #61 number plate. As they have in all their NORRA efforts, they will be running solo, with no chase team, carrying everything they need with them, then turning around and driving the vehicle all way back from the San Jose del Cabo finish line to the United States.

"Our goal is never to win any podium placement, just finish the race, have fun and want to do it again," shared Ned. "So far, that strategy has seen us on the podium three times, with big grins, because we always have fun in a NORRA event. We always can’t wait for the following year to do it again." 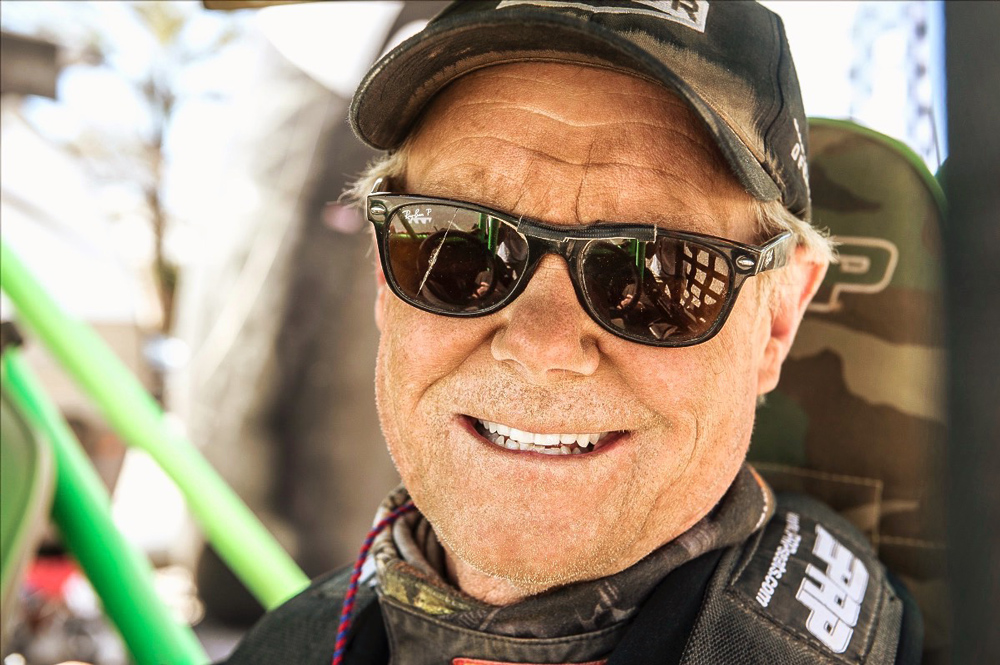 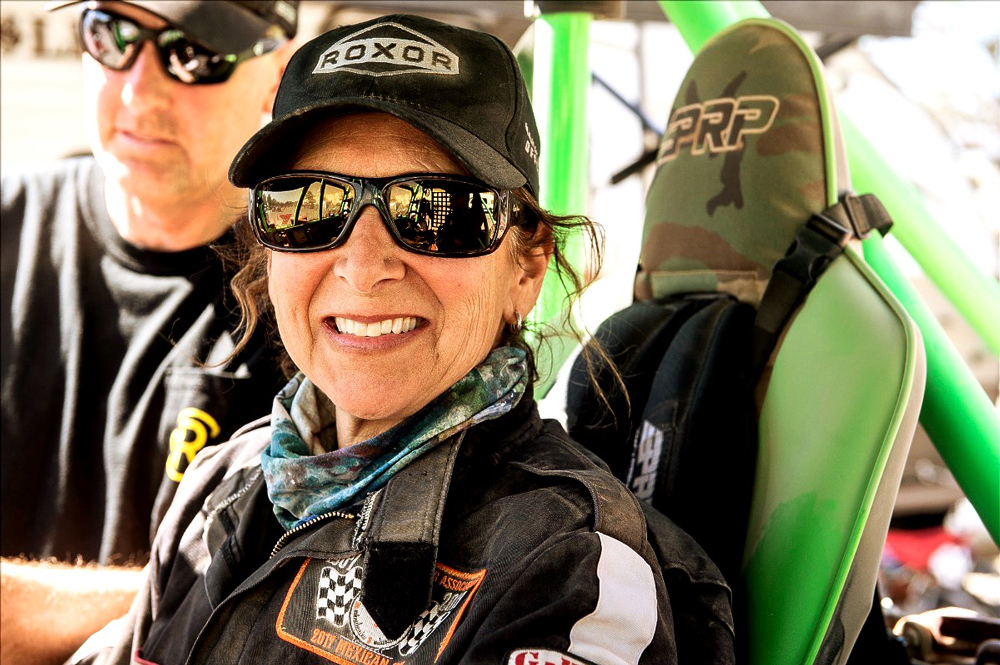 THE DYNAMIC DUO: Ned and Kat Bacon are world adventure seekers whose on and off-road travels have taken them to all corners of the globe. However, the couple admits one of their favorite events is the annual Yokohama NORRA Mexican 1000. (Photos: Boyd Jaynes)

The newly introduced Mahindra Roxer features a stout 2.5-liter turbo diesel engine, a 96” wheelbase and leaf spring suspension in all four corners."The Roxor should deliver the feel, especially to our backsides, of those early NORRA racers," explained Ned with a laugh.

Given a main goal of introducing people to the new Mahindra while also proving its tough reliability, with the exception of NORRA-mandated safety equipment, the Bacons will take on the Baja peninsula with a bone-stock Roxor. They feel the Roxor is up for the challenge, since Mahindra has been producing this vehicle as the “Thar” in their home markets since 1947.

Originally, Mahindra signed into a licensing agreement with Willy’s Overland to produce CJ2As for the Indian military. Like our WWII MB Jeeps, the Thar soon became a popular civilian vehicle for the primitive roads in India, Nepal and other surrounding countries. Mahindra has been building this rugged, WWII-based rig ever since, upgrading it with a diesel engine, a 5-speed gearbox and (slightly) more modern sheetmetal over the years, but its vintage roots still shine through. 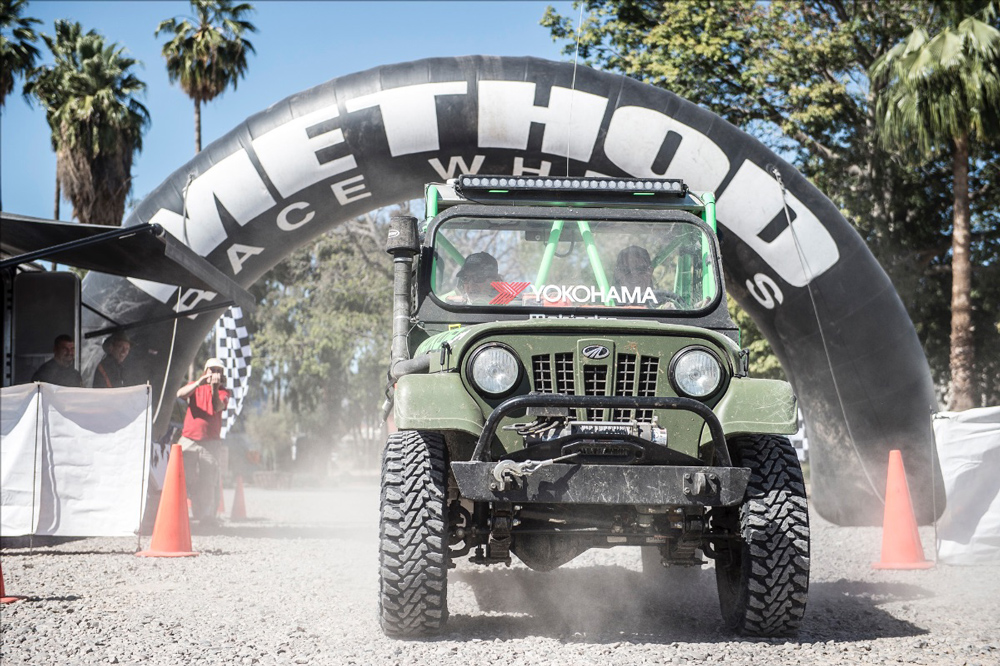 Joining Mahindra in this year's NORRA Mexican 1000 effort is a long list of corporate partners helping to make the Bacon's ambitious plans a reality. NORRA’s numero uno sponsor Yokohama Tire graciously provided a set of their tough Geolandar M/T G003s. Mac’s Custom Tie Downs will be holding down their supplies as they bounce 1,200-plus miles across Baja, while PRP seats and harnesses will be keep them safe and comfortable. Vivid Racing put their special tune on the Roxor's stock ECU to raise their top speed above the government mandated 45mph for UTVs. A Pull Pal winch anchor will come in handy in the event of getting get stuck in Baja's notorious silt beds.

Mahindra North America supplied accessories include a 8000# Warn winch, a KC HiLites light bar above an optional windshield, a Spartan rear locker and prototype half doors -- all available from Mahindra to outfit anyone's custom Roxor.

"One of the main features that attracted Kat and me to NORRA back in 2010 was the focus on bringing vintage racing to off road racing," said Ned. "We have always brought a vintage rig to NORRA, whether it’s been our Willy’s based rock crawler, our Porsche 911 or, last year, a VW Vanagon Syncro when I teamed up with the fun-loving GoWesty gang in the RV class. NORRA is all about fun and not taking yourself too seriously. To that end, Kat and I are looking forward to racing our vintage-spirited Roxor in the 2019 NORRA Mexican 1000." 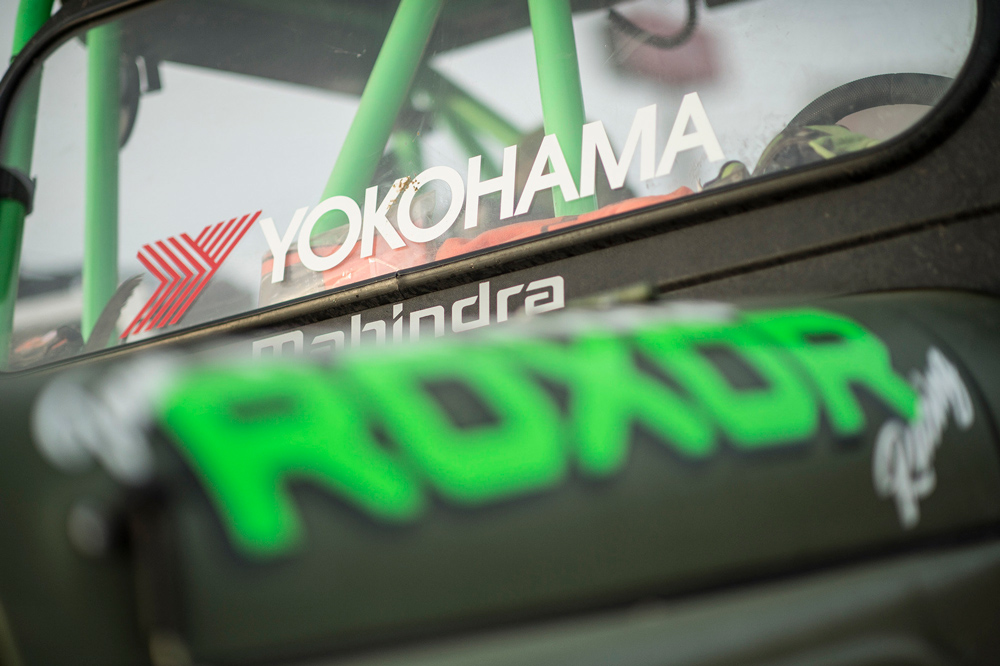